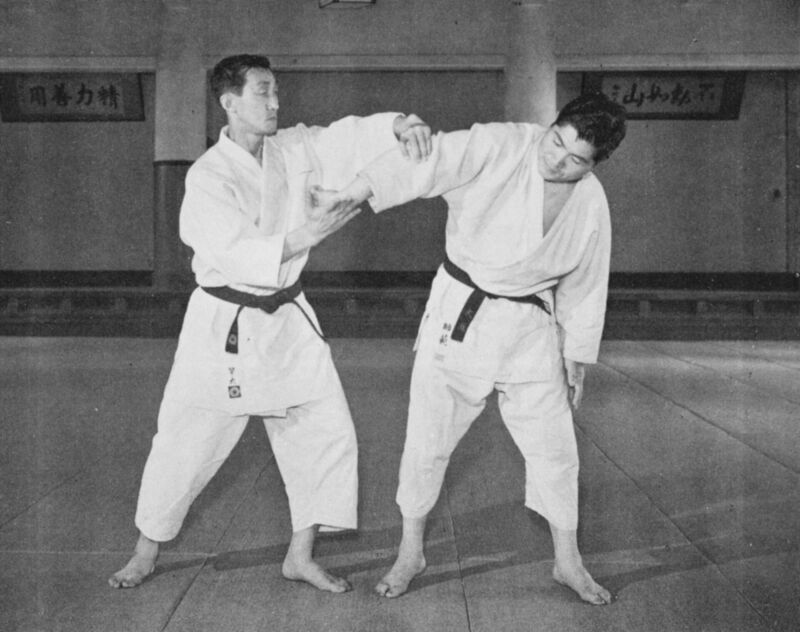 by Erik DiVietro
on March 1, 2018
Professor Tomiki in civilian attire
Professor Tomiki at a 1934 summer training with O Sensei
taken c1935 from Tomiki anniversary sashinshu;permission to use photos granted by Harada Sensei on 2001.10.28 in Osaka.
A young Tomiki, probably during a judo session
Working with Hideo Ohba, his friend and fellow aikidoka
Teaching on proper pinning technique

In December 1940, Morihei Ueshiba had a vision which was later published by his son and successor, Kisshomaru. The vision expressly forbid the practice of shiai (試合) in aikido on the grounds that aikido’s only function was to embody harmony (和合, wagō) and peace (平和, heiwa).[1] Unlike other budo like judo and kendo, aikido would be practiced only in kata and formal randori demonstrations which were more or less choreographed.

Tomiki Sensei, who had already received his menkyo kaiden and the rank of hachidan from Ueshiba and was then teaching in Manchuria, essentially ignored Ueshiba’s mandate.  Eventually, this would create a rift between Tomiki and Ueshiba’s son Kisshomaru, who took over the running of the Kobukan and what became the Aikikai in subsequent years.[2]  Through the 1960’s Kisshomaru insisted that Tomiki stop using the name aikido for his art, and at various times Tomiki did use other names, such as when he made his first appearance in Black Belt magazine and was credited with teaching aikijujutsu.[3]

The Origins of Tomiki’s Involvement in Aikido

The question most often encountered about the rift between Tomiki and the rest of the aikido world is why? Why did he insist so strongly on the inclusion of shiai randori as part of his curriculum when none of Ueshiba’s other students included it or even experimented with it? To answer this question, you must look back to the earliest days of his interactions with Ueshiba and what would become aikido. The answer begins with Tomiki’s first teacher, Jigoro Kano.

According to Tomiki, Kano wanted him to learn Ueshiba’s use of atemi waza (strikes) and kansetsu waza (joint locks) and to develop a system that complemented judo and could be integrated into it.[4] In 1936, Tomiki was ten years into his exploration of aikido at the Kobukan. He visited the elderly Kano to report on his research. Kano reiterated to him, “It is necessary for us to learn techniques that you learned from Ueshiba, but it is not easy to learn.” According to several of Tomiki’s contemporaries, he replied, “If we study those techniques using the ‘Principles of Judo’ or the scientific principles of judo that Master [Kano] discovered, I think that it won’t be impossible.”[5] Two years later, shortly before Kano’s death, he said to Tomiki, “In what was known as jujutsu in the old days, everyone used the same sort of techniques as Ueshiba Sensei. The problem, however, is how to incorporate them into training.”[6]

The Pre-War Development OF Hanare Judo

Kano died in 1938, and he was succeeded by Jiro Nango who continued to work with Tomiki even though Tomiki had relocated to Manchuria. Nango wrote, “Judo is superior to other martial arts in case of standing close, but in case of keeping distance, we must approach an opponent rapidly to control him because he can use a weapon. We must train this skill.”[7] In 1940, Tomiki made a presentation at the Kodokan of what he called hanare judo (離柔道, “separation judo”). His hanare judo was distinct from the usual kumi judo (柔道組, “grappling judo”) because it was practiced from rikaku taisei, the distance at which you cannot leg sweep your opponent.[8] It borrowed heavily from Ueshiba’s aiki budo but also the Koshiki no Kata, a form that judo had inherited from Kito Ryu Jujutsu.[9]

The events of World War II overtook Tomiki’s ability to continue his research, and he was not able to pick it up in earnest until the mid-1950’s, when he took a post as professor of physical education at Waseda University. He had spent the intervening years first in Manchuria, then as a Russian prisoner of war, and then working with the US occupying forces in Japan, even touring the United States in 1953. There he taught both judo and aikido, as Ueshiba’s art was now called, but he did not hesitate to ignore Ueshiba’s ban on shiai. He worked on the overlapping concepts of Ueshiba’s aikido and the Koshiki no kata, devising a system of techniques that could be done safely at speed in randori. In Tomiki’s mind, this was the natural evolution of aikido when practiced within the judo philosophy.[10]

By 1956, he had an informal aikido group at Waseda where in 1956, they switched from toshu randori to tanto randori because it forced players into rikaku taisei. This was actually an extension of a view Kano had expounded as early as 1934.[11]  Two years later, he created a method of scoring and evaluation and the regents of Waseda allowed him to form the first collegiate aikido club.[12] By 1967, his system – complete with the now familiar seventeen techniques of the Randori no Kata and the modern methodology – had spread to other universities in Japan.

The Fundamental Difference Between Tomiki and the Rest of Aikido

In 1969, Tomiki claimed that thousands practiced his art. Tomiki articulated its attraction in an interview with Black Belt, the first published article on his method:

“…the Uyeshiba [sic] school of aikido has lost many of the practical advantages that jujitsu possessed by dropping such key training methods as randori…Both randori and shiai lend the martials arts a necessary practical basis. By training through randori and improving your techniques through shiai, you can systematically develop your techniques and make them more practical.”[13]

In this assertion, Tomiki’s philosophical foundation becomes evident. While he studied aikido intensely, it was Kano’s judo philosophy which undergirded his work and not Ueshiba’s. As Ueshiba distanced himself from koryu bujutsu and its inherently violent reliance upon shobu ho, literally learning through victory, Kano embraced it in the form of shiai randori, which balanced shobu ho with rentai ho, or the training of the body, and shushin ho, or the development of wisdom.[14] Shiai was a safe way to develop a rounded, practical martial art. Like Kano, Tomiki understood that without this practical laboratory where shobu ho could be developed, aikido would become deficient.[15]

“[Jigoro Kano] did not teach his ways of judo but a universal principle through judo, so everyone could devise something from their own ideas using judo principles…Tomiki’s achievement was based on Kano’s ideas and made one more step toward their ideal.”[16]

Although Tomiki clearly mastered aikido and was held in very high regard by a number of other aikido masters, among them Hirokazu Kobayashi, who partnered with Tomiki and their mutual student Tetsuro Nariyama to establish the Shodokan in Osaka,[17] his foundational beliefs about aikido were different than the views held by almost everyone else in the aikido sphere of influence. Tomiki’s aikido is not pure aikido in the esoteric sense. Its philosophical basis stems from Kano and judo, which is why it embraces shiai.

As this paper is concluded, it is important to note that this underlying philosophical difference does not make Tomiki Aikido less than other aikido. One of the fundamental errors made by Tomiki practitioners is to abandon the wealth of aikido in the curriculum in favor of becoming “good” at randori, which is only one aspect of the training. Such a move is fundamentally in contradiction of Tomiki’s original intent. Tomiki’s genius lay in embedding so much of what he learned from his two great teachers into his curriculum. Tomiki Aikido is not less than other aikido, but it is distinct from it. At its core is the same pursuit of universal principle that characterized judo; and going forward we should seek to find that universal principle, balancing the pieces and growing stronger and more rounded in all areas of our lives, as our teachers intended.

[5] Fumiaki Shishida, “Judo’s Techniques Performed from a Distance: The Origin of Jigoro Kano’s Concept and Its Actualization by Kenji Tomiki,” Budo: Science of Martial Arts vol 6, no 4 (2010): 168.

[8] Fumiaki Shishida, “The Theory and Methodology of Aikido Kenji Tomiki Intended to Teach: Key Contents Which We Have Been Misunderstanding,” presented at Sheffield, UK, March, 2007.

[12] Fumiaki Shishida, “History of Competition in Aikido,” saved from an archived copy of https://tomiki.org, accessed February 26, 2017.

[15] Kenji Tomiki, “Kodokan Judo and Its Technical Development Which Contributed to the Modernization of Budo,” Bulletin of the Association for the Scientific Study of Judo Report 3 (1969): 136. (129-137)