Parallels in Learning Music and Aikido 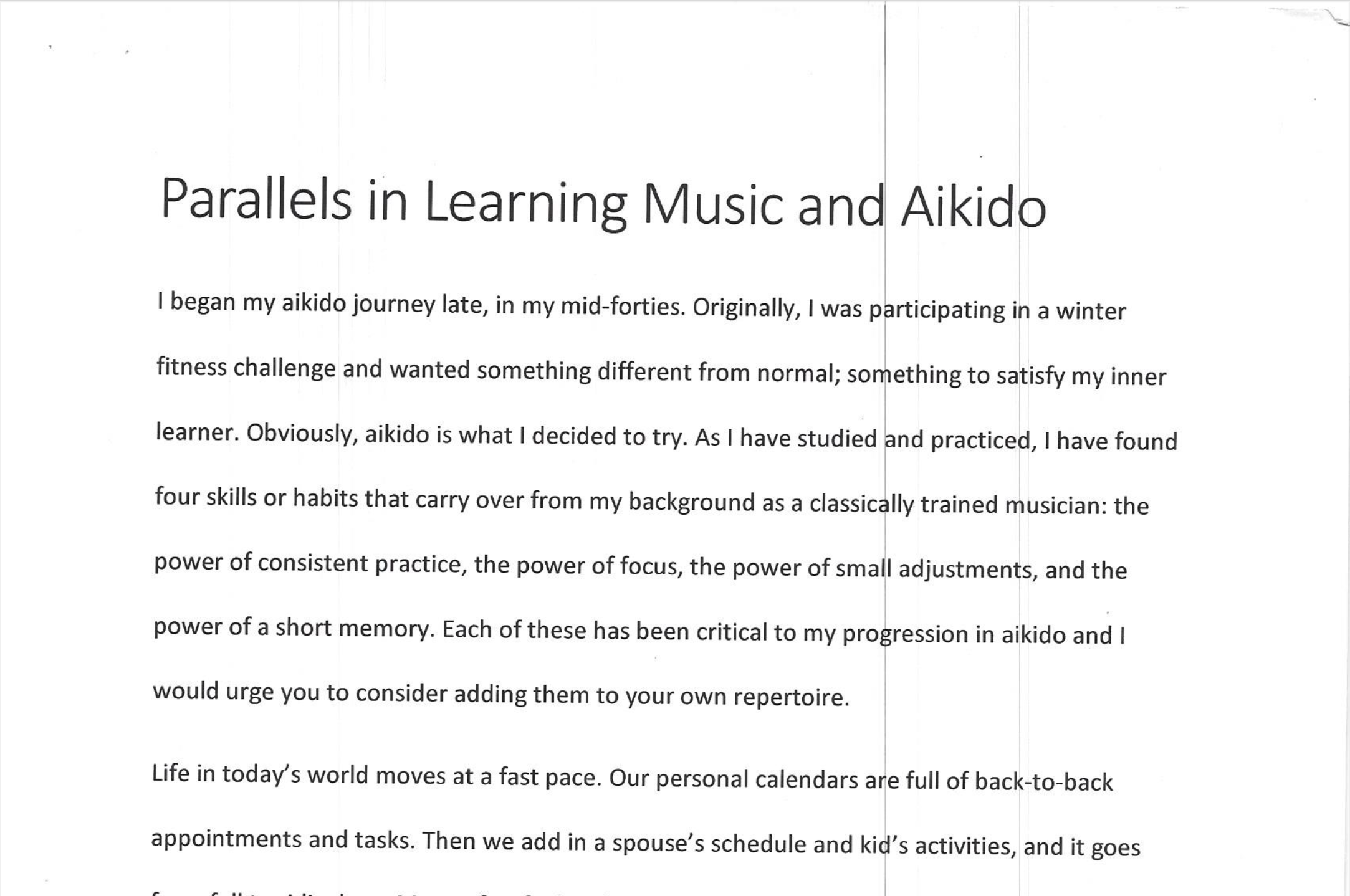 I began my aikido journey late, in my mid-forties. Originally, I was participating in a winter fitness challenge and wanted something different from normal; something to satisfy myinner learner. Obviously, aikido is what I decided to try. As I have studied and practiced, I have found four skills or habits that carry over from my background as a classically trained musician: the power of consistent practice, the power of focus, the power of small adjustments, and the power of ashort memory. Each of these has been critical to my progression in aikido and I would urge you to consider adding them to your own repertoire.

Life in today’s world moves at a fast pace. Our personal calendars are full of back-to-back appointments and tasks. Then we add in a spouse’s schedule and kid’s activities, and it goes from full to ridiculous. Many of us feel guilty about needing to get exercise and we know that hobbies help with reducing stress. So, we look for activities that fit the bill. What we do not consider is how to adjust our overflowing calendars to add these things, we just tryt o cram them in. Ifaced this dilemmamanyyears ago in college as a music major. Ihad a full schedule of classes, and Iwanted the collegesocial life. Ialso had at least two hours of rehearsal anda minimum of three hours ofpractice to accomplish each day. Making this all fit with the workload of a liberal arts college was not something I did well ata g e eighteen. Three hours of practice each day was tough to figure out. Itried the binge practice approach. Let me cram in five or six hours at the weekends and minimal to no practice during the week. This failed miserably. After manyexperiments, Ifinallylearned that consistency was more important than trying to cram it all in. Icould only cram so much into myhead atany one time. So, I began to get up early each day and practice two hours before my classes. I see the same behavior in people attending aikido. They show up to class every class for two weeks and then take a week or two off. They reappear for a class here andthere. Theirprogress is quite stunted with this approach. My recommendation is to figure out how to attend consistently. If you can only make one class a week, do so consistently. Your progress will be slower, but it will be steady.

I would venture to say that all of us constantly have things on our minds. We are thinking about
what to cook for dinner, how that meeting went earlier in the day, the minor disagreement we mayhave had with our spouse, tasks that either went undone orneed to go on the to do list; this is normal and natural. There is a place for life’s cares and even sharing them in the dojo. Relationships are built on caring about each other’s problems and triumphs and sharing them and sharing stories about life. At a certain point, those things must be set aside temporarily to focus. In learning music, I learned to leave those things outside the practice room door. If Itook them ni with me, practice was disjointed and disorganized. Progress was minimal and rarely did Iwork onwhat really needed myattention. In aikido, Ihave found a similar need and to be honest I need the break from life, from the constant mental chatter.

On the mat is a place to set life aside byleavingit at the edge of the mat. On the mat is only aikido and the technique(s) I am working on. As Iget to know you, Icare about you and your challenges and triumphs, but those conversations need to happen before or after class, not during. Aikido is a demanding art.
In order to learnand for safety, Ineed to be focused while on the mat. Iencourage you to consider doing the same thing.

I play a stringed instrument. It is an undertakingfull ofsmall adjustments and tweaks: the angle of my bow to the strings must be correct, the placement of my bow between the end of the fingerboard and bridge changes my timbre, how I roll my fingertip changes my pitch, the list goes on and on. All of it must be sorted out for each piece of music and is even sometimes called out in the music for a particular sound or effect. Perhaps, Iam unusual, but I enjoy that aspect of aikido. It is an art of small adjustments: the angle of my body to uke’s body, how much extension Iput into my arm, even seemingly simple things like keeping my shoulders back and my head up. Whenever a technique isn’t working, or I am working too hard to throw someone. It always comes down to those small tweaks. Something simple that Iam missing, or I am making it too hard and addingextra movement to the throw. If you are struggling with a
particular technique or even the art in general spend some time going back to basics and
making sure your body mechanics are all correct. Ibet you will find some small tweaks to an angle or body position that will suddenlymake the throw effortless and your uke will grace you with that Aiki giggle and a high five.

I have been playing music and performing for more than thirty years at this point in my life. I have never had a truly flawless performance with no mistakes. There is always a finger fumble or a few wrong notes. It is the nature of the beast and probably the hardest thing to accept as a musician. It went perfectly in practice, why can I suddenly not play that passage correctly? Even in practice, you learn to be glad for the small gains and forget what did not goright. Otherwise, you run around depressed all the time. To learn, you are always workingo n stuff that is at the edge of your ability. tI is the same on the mat, ni practice, Inote what did not work and go hunting forthe small adjustment. Ido not spend time beating myself up for missing the throw or being terrible at Aikido. Ihave a short memory for that stuff. This is even more true when it comes to testing for the next belt. I strive to bring a great presentation of my abilities to the test, and I bring all my focus and energy to the undertaking.I do not approach a test expecting to fail or to do badly. Infact, I approach a test positively with an expectation of promotion. However, I do approach it with the realistic focus that it is likely that something will not go quite right while I am testing. Human nature is to stop and fix a mistake and become frustrated about the mistake. Music taught me to catalog it for future review, own it in the moment, and continue moving forward. I strive to do this in Aikido as well and I urge you to consider doing the same.

I certainly did not expect to find so many parallels between learning classical music and aikido when I started out. I simply thought it would be fun to learn a few things and get some exercise. I have gained some skill and ability at the art of aikido while on the mat, but I do not put that down to my amazing physical and mental abilities to absorb and do aikido. I am aguy in his forties with all the limitations of a life spent working and not taking particularly great care of his body during his twenties and early thirties. The back aches in the morning and the joints creak and crack. My progress and growth can be directly attributed to my great teachers on the mat and to consistent practice, focus, looking for those small adjustments, and having a short memory for mistakes and errors.